On
the first episode of Howard’s new podcast, his guest said,
“in panics, all assets are correlated.” I suspect that is true
to some extent.

When bad news hits, I have seen traders sell quickly, get to
cash, and then take some time to evaluate the situation before
acting on the news. That is true of a company missing its quarter,
a sudden management change, and many other forms of bad news. It is
also the case when macro events hit the market.

So when a macro event hits the markets, all assets get sold in a
“risk off” trade to increase liquidity and buy some time to
figure out what is going on.

But soon enough, the market starts to sort through winners and
losers. That’s when things stop correlating.

The obvious example is Zoom which is clearly a major beneficiary
of this macro event we are in the middle of.

Zoom sold off with the market over the last week and a half but
has rebounded nicely and year to date is up something like 75%.

Blue Apron, which the market had left for dead, is another
example of a business that will likely do well in this macro
environment, or at least it seems that the market thinks so. 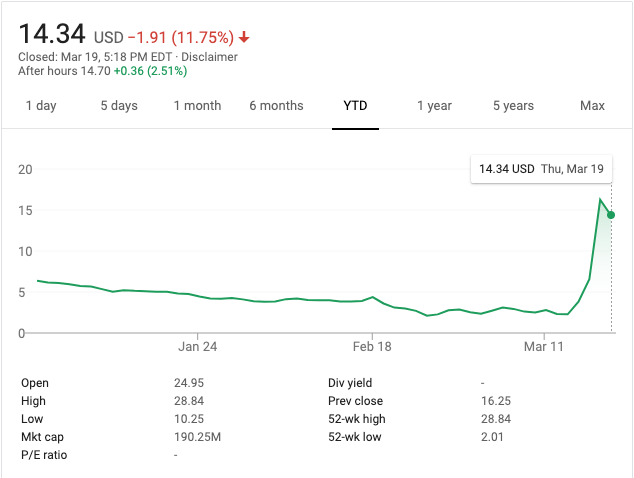 Contrast that chart with Bookings, one of the largest (the
largest?) online travel businesses, and you can see the lack of
correlation. 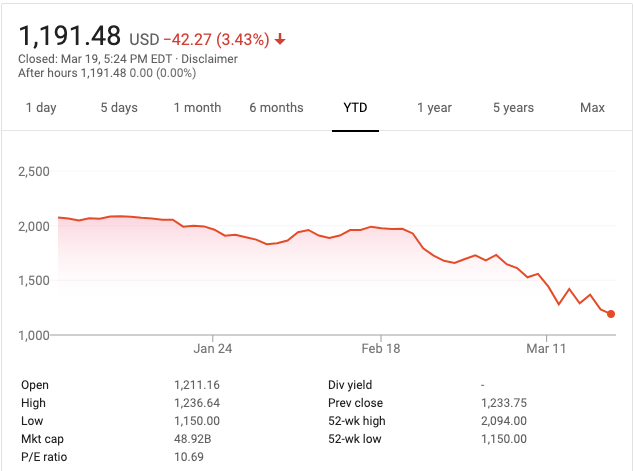 I believe this downturn will see a greater number of winners and
losers than most of the downturns I have lived through. That is
because we are already into a pretty meaningful transition from an
industrial/physical economy to a knowledge/digital economy and the
very nature of this macro event is accelerating that transition in
many ways. We just won’t go back to doing some things the same
way.

I do plan to go out to my favorite restaurants as soon as I can.
But I also plan to fly even less for business when this thing is
over. Some things will return to normal. Others won’t.

And that is what the market will sort out over the course of
this downturn and is already busy sorting out.

Which takes me, naturally, to crypto. Crypto, to true believers
like me, was supposed to be a place to go for safety. We can trust
crypto when we can’t trust banks or governments, right?

Bitcoin crashed harder than anything in the first few days of
the market selloff. It was down 60% over five days from March 7th
to March 12th. But since then it has recovered nicely and is now
only down about 30%.

Howard’s guest was right. In panics, all assets are correlated
because the market needs to deleverage. Margin loans get called.
Leveraged bets go bad. Weak hands fold. And in crypto that happened
faster and more furiously than any other asset class. That’s
because the market infrastructure is less mature, there are places
(largely outside of the US) where you could (and maybe still can)
get 100x leverage on a crypto trade, and because these markets are
not as liquid and other markets.

But now that the deleveraging has happened, we can look at what
crypto has to offer.

Bitcoin is “hard money.” There is a fixed supply of it. 21mm
bitcoins to be exact, some of which are gone and are never coming
back.

Contrast that to what the central banks are doing right now. The
printing presses are melting down there is so much money being
printed to stabilize the global economy.

So if you want to hedge your portfolio from that risk, where can
you go? Actually a few places. But one of them is Bitcoin. And I
suspect that will be where some smart money will go over the next
few months, quarters, etc.

But that’s not all that crypto has to offer. The entire
decentralized finance stack (fintech 2.0) is being built on
Ethereum. And we are seeing decentralized bandwidth, storage, and
other critical infrastructure being developed in a number of new
protocols.

I’m not going to write an entire crypto thesis here. But my
point is that crypto won’t be correlated with the overall market
for long. It’s doesn’t even appear to be a week in.